Architect Boris Bernaskoni, is releasing the manifesto ‘AND WAR AND PEACE', dedicated to architecture and the destructive forces that it opposes. Within its core resides an analysis, containing a typology of 10 different forms of war and 10 projects developed by Bureau Bernaskoni, that respond to these conflict-ridden challenges. The Manifesto is the starting point to the multi-year project ‘AND WAR AND PEACE' which activates the architect’s first personal exhibition in Russia and the construction of new cities.

Bernaskoni’s projects are dedicated to the creation of a new vision of the world, a world without war, a world of sustainable development, where the architect can build peaceful connections in social environments through his statements. Architecture, in his opinion, must solve humanities problems: social, ecological and political. This is what he does, starting with his diploma at the Moscow Institute of Architecture and his debut at the main event of the Venice Biennale in 2008.

Analytics and statements can be uncovered in each of Bernaskoni’s studies. In this case, it is the pacifist manifesto ‘AND WAR AND PEACE'. The architect speaks against wars, those that destroy cities, and for the redistribution of at least 1% of military budgets for the benefit of architecture and construction. For the creation of new cities as the foundation to long-term, peace-making operations.

In the manifesto, Bernaskoni states "Name the initial impetus for the emergence of a terrorist, and you will know what to do. Social eruptions and chaos appear where the desires of the masses are ignored and when they are not presented with fair solutions. You may be surprised once more, to hear that the analysis of the majority of the targets in the 17 sectors of sustainable development stated in the Resolution, taken by the General Assembly on the 25th of September 2015 entitled "Transforming our world: the 2030 Agenda for Sustainable Development" can be solved by means of the work and talent of architects".

Utilising the model of 10 wars (biological, atomic, climatic etc), Bernaskoni explains the cause of instability and cultural stagnation in the history of the past and the present. He takes 10 military messages, those which represent a typological spectrum of the challenges of ‘war', and with the examples of the bureau’s projects presents constructive suggestions to the solutions of these challenges. What can current architecture provide as a counter to the pandemic as a form of biological warfare? Why does the project ‘Port' in Azov, act as a resolution to economic warfare and financial oppression? How does the ‘Arc' in Nikola-Lenivets remind us of what the world is made from, and preserve within it the memory of geophysical artillery, and the ‘Matrex' building, located in the Skolkovo centre of innovation, prove the pointlessness of hybrid warfare?

Bernaskoni, considers the history of human culture as a cycle of parallel processes: destruction and construction. He labels them under the terminologies of ‘War' and ‘Peace'. ‘War' is everything that challenges humankind and brings loss to the world: socially, ecologically and politically. All of these challenges, Bernaskoni believes, demand a solution. It is through this logic that ‘Peace' emerges. The backbone of which could include scientific innovation and construction or creation, in the broadest of terms.

The manifesto is to be published on the website of ‘AND WAR AND PEACE', where news and forthcoming actions regarding the project will be recorded. One will also be able to donate resources towards the project’s development and attain editions containing the manifesto there, which will be circulated as a limited edition of 100 copies. Collected funds will be utilised for the development of the exhibition and the book ‘AND WAR AND PEACE', and in the long-term, towards the construction of a new city as the foundation to long-term peace-making operations, as stated in the manifesto.
22.02.2022
BORIS BERNASKONI PRESENTS THE MANIFESTO "AND WAR AND PEACE"
"Emperor, please, send me an architect"
Pliny the Younger to Emperor Trajan.
Letters of Pliny the Younger.

Politics rules the world. The power of politics lies in the resources it can draw upon. But what is the biggest, most valuable outcome of politics? As surprising as it may seem, it is REAL ESTATE.

Over half the world’s population lives in cities today. People relocate to towns for work, family reasons, and for safety. The contemporary city is a mini state, with its own complex system of governmental and life support systems. The people residing within it shape the demand for food, education, safety, happiness, and love.

I introduce the concept of a ‘Matrix of Demand' [2], formed by the city’s inhabitants, which enables the planning and creation of necessary supplies. Their absence or untimely resolution leads to hunger, illiteracy, aggression, poverty, and hatred.

How can a dignified level of life be created and maintained, so that a ‘loving family man' is not transformed into an embittered terrorist? How can the Matrix of Demand be created and controlled? Is there something out there, apart from fear, that drives humanity forward?

The United Nations believes that a comfortable environment is capable of solving many of the contemporary world’s problems.

Clearly, terrorism is unacceptable. It is equally as clear, that terrorism cannot be combatted without force. Nor can the role of politics be avoided. But, as always, we must tackle the consequences. We must work with the initial causes. Name the initial impetus for the emergence of a terrorist, and you will know what to do.

Social eruptions and chaos appear where the desires of the masses are ignored and when they are not presented with fair solutions. You may be surprised once more, to hear that the analysis of the majority of the targets in the 17 sectors of sustainable development stated in the Resolution, taken by the General Assembly on the 25th of September 2015 entitled "Transforming our world: the 2030 Agenda for Sustainable Development" can be solved by means of the work and talent of architects.

Planning territories, design and construction — are all tasks in the remit of architects. However today, a new tool has appeared in their arsenal — BIG DATA, which enables the creation of the Matrix of Demand, the introduction of its monitoring and solves the problem of sustainable development of the social environment and urban areas in any country of the world.

If politicians are truly prepared to solve the problems that have accumulated worldwide, then it seems the time has come to find the resources needed to recruit those who will be able to solve these issues.

This material has been prepared for ‘interested organisations' and is a constructive proposal for the use of architecture and construction to create new cities as the foundation for viable long-term humanitarian peace-making operations.

Plans of a home for one family.
DOM.SYSTEMS.BERNASKONI.
2020

Hybrid warfare — a form of hostile manoeuvres, through which the attacking side does not resort to a classical military invasion, but instead suppresses its opponent by using a combination of operations, sabotages and cyberwarfare all the while supporting rebels active in the opponents' territories. Concurrent to this, military operations may not be conducted at all, and if formalities are concerned, hybrid warfare may take place during peaceful time periods.
MARTEX. Main public building of Skolkovo innovation centre, acting as a hub that commercialises ideas. An architect may only respond to hybrid warfare with a hybrid building, connecting all that is current in architecture, science, business and art for public discussion, testing and for the creation of new startups. BERNASKONI. 2012-2018

We are in the midst of massive amounts of data and variables related to the real estate industry. Land, houses, streets, neighbourhoods and cities form the material platform for the lives of millions and billions of people. According to the international real estate agency Savills, the aggregate value of real estate globally, is 217 trillion dollars (YEAR).

Residential buildings account for 75% of all real estate in the world. The total value of inhabited apartments and houses worldwide accounts to 162 trillion US dollars. This is a huge sector, and it is impossible to preserve human life on Earth without its harmonious development and maintenance. This was understood even in ancient Rome, thousands of years ago.

Social unrest in the provinces of the Roman Empire generally began when public real estate — comprising of roads, water, baths, theatres, and sewers — fell into disrepair or functioned poorly. The reaction of the people was such that the emperor had to send the best people in the state to solve named problems. Thanks to Pliny the Younger, whose letters have been preserved, we can obtain information that remains instructive to this day.
Real Estate as a platform for life 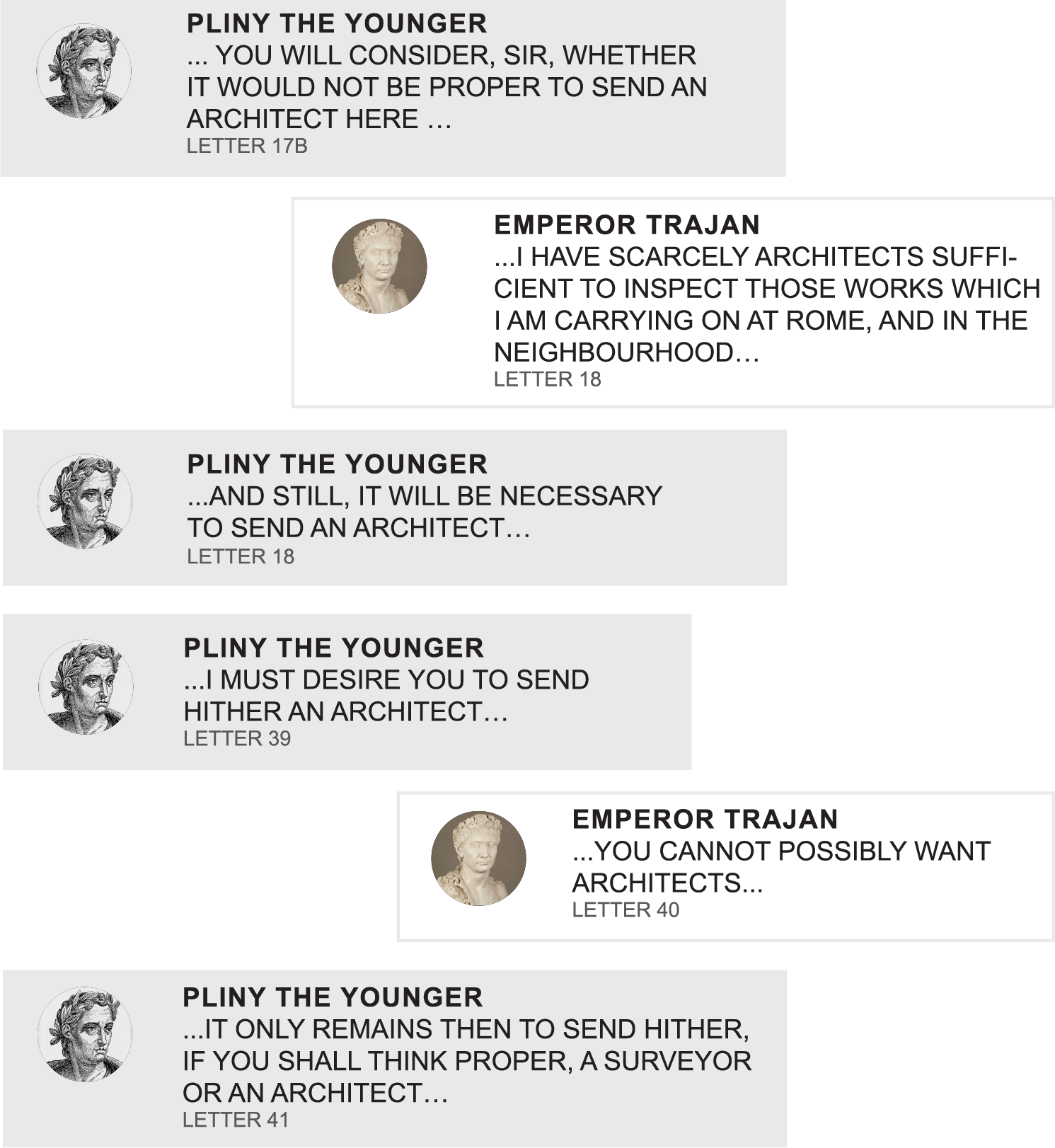 Part I
$217
tn
the aggregate value of real estate globally, ACCORDING TO THE INTERNATIONAL REAL ESTATE AGENCY SAVILLS﻿
Correspondence between Pliny the Younger and the Emperor Trajan, book X. 300 YEARS AFTER THE DEATH OF PLINY, ROME FELL UNDER THE WEIGHT OF ITS OWN GRANDEUR AND SCALE…

If we note that the total cumulative value of the real estate industry is 217 trillion US dollars, it will take 129 years to equalise the total value of weapons worldwide to real estate.

With one condition: if all architects and builders stopped working and realtors froze prices. But, taking into account the need to update military arsenals every 15−20 years, this competition becomes pointless.
War. Military actions. Weapons as a means of maintaining peace
Part II

Cities. Architecture
as a means of
maintaining peace
Part III
I presented figures. Enormous figures, that give us cause to reflect on our values and our future existence and development. They are so enormous and so significant that I will refer to them as VERY BIG DATA.

They combine politics, economics, social fields, and culture, which are either in harmony, or coming into imbalance. This is a process that needs to be steered and for which solutions must be found in the event of contradictions arising.

Let us recall Pliny the Younger. Could it be, that architecture can cope with the emerging challenges?

While the ancient Roman architect worked with only a few parameters of the urban environment, providing solutions that were enough to restore the well-being and tranquillity of society, the architect of today has to deal with tens and hundreds of parameters concerning the inhabited environment, making him a truly significant figure in the contemporary world.
One question still remains, however: are there politicians to be found who, like Pliny, will fathom that they must invite the architect to address these issues?

We could return people to their homelands if the first fifteen countries on the arms purchasing leader board agree to allocate 1% of their military budget towards the implementation of our proposed plan. Instead of 100 aircrafts, their militaries would receive 99. Not a hundred missiles or tanks, but 99… The hundredth plane would not then drop bombs, the hundredth rocket would not destroy a town, and the hundredth tank would not fire into a hospital…
These funds will allow us to build new cities, to re-store those that have been destroyed and, most importantly, to give people such cities, infrastructure and capacities in their own countries that none of them would ever contemplate destroying anything. These will be cities with their own self-defence mechanism against vandalism. Advanced, free and protected against self-destruction.

Our proposal is to build these new cities. We, the architects, are ready to solve this problem. On a ‘turn-key' basis.

SUPPORT THE PROJECT
Collected funds will be utilised for the development of the exhibition and the book ‘AND WAR AND PEACE', and in the long-term, towards the construction of a new city as the foundation to long-term peace-making operations, as stated in the manifesto.
Click to order
Ваш заказ
Total: